The massif of Tymfi is delimited on the North by Aoos River, on the West by Voidomatis River and on the South by the gully of Gyftokampos which then is named Skamneliotiko Rema, until the point where it meets Voidomatis River.

Climbing routes are being developed in this area since 1955. The first registered climb was realized on 7-8/6/1956 by Giorgos Michailidis - Giorgos Xanthopoulos on the face of Gamila I. On the same tower, on 25-26/8/1960, Guido Magnone and Spyros Antypas climbed the central pillar. The choice of Magnone, a famous climber of the time, to open up a route at Gamila, made the field known in Greece and Italy. Thus, in 1964, a group of Italian climbers consisting of S. Dalla Porta Xidias, B. di Beaco, V. Zechini, W. Mejak, F. d' Urso, S. Glavina and others, visited Tymfi and realized several climbs. Right after that, Spiro Dalla Porta Xidias (who was of Greek origin), wrote a book about the Greek mountains, called "Sui Monti Della Grecia Immortale", which focuses on technical descriptions of the routes realized by this group of climbers, without any drawings or photos included though.

The rock of the massif is limestone of mediocre quality, while there are also some zones of extremely loose rock.

In order to climb the routes of that field, one should be equipped with a full set of nuts, a full set of friends and some pitons, given that most of the routes where ascended for the first time many years ago and were back then barely protected with pitons, which besides are today in a very bad condition.

The mountain of Astraka is situated on the west side of the massif of Tymfi and its faces are NE to NW orientated.

Megalo Papigo village is 61Km far from the city of Ioannina (or Giannena). As far as accommodation is concerned, the village offers hostels and rooms to let. You will also enjoy very good food. The Mikro Papigo village is 4Km far from Megalo Papigo, and offers accommodation - hostels and rooms to let - as well. In between the two villages there is a small gorge that crosses Potistres gully, forming little lakes, called "Kolympithres"; this place is ideal for swimming after an exhausting climb, but it is also offered for spending the night in sleeping bag.

On the northeast side of the refuge, at an elevation of about 1750m, a plateau called Lakka Tsoumani is formed. It is named after the sheepcote of the family Tsoumani which is located in the same area and which can be approached within 20min from the refuge. There, one can see the beautiful formation of little lakes, which though run dry during the summer. The biggest one is Xeroloutsa Lake. While crossing the plateau northeastwards and after having passed by a water source, in about 1h and at an elevation of about 2050m, the famous Lake Drakolimni appears. In the waters of this lake live Tritons (triturus alpestris), which survive throughout the winter by hibernating.

Approach to the peak of Gamila I requires 2h of hiking from the refuge. The footpath passes through the plateau Lakka Tsoumani and at the foot of Astraka it meets a water source, named Romiovrysi. It then continues eastwards and crosses the col between Astraka and Ploskos, at 1950m, and finally, by moving northeastward, it ends up to the peak.

In order to approach to the NW Face of Astraka from the refuge, descend the path that leads to Papigo village, down to the point where the routes are located (15min - 30min).

The northwest gully offers an easy way back from the peak to the refuge (1h). During the winter the inclination of that gully is 35°. Nevertheless, great caution is required, since you might come across big cornices.

The approach to the Face of Lapatos takes about 1h from the refuge of Astraka.

One can approach the Face of Gamila mainly from four starting points, and more specifically from four villages, Konitsa, Vrysohori, Tsepelovo and Papigo:

The camp is usually pitched underneath the crag, where although there are no water sources, there are couloirs, which last during almost all summertime and can provide you with water. A place suitable for pitching camp is located between Gamilla I and Gamilla II, close to a sheepcote. Another place for spending the night without tent is underneath an overhang at the base of the face of Gamila I. Finally, in case you are planning to climb a route on Gamila II or on the eastern towers, the most appropriate place for spending the night is right underneath the face of Gamila II, on the scree gully.

Climbers prefer approaching the base of the mountain by following the path that starts from Konitsa (6h). They usually spend the night on the foot of Gamila II, from where they can climb routes located on the crags of Gamila and then return via the col of Karteros back to the same place. This option presents the disadvantage of lack of water though. Another option for climbers is to leave from Papigo village and go up to the refuge of Astraka. From there, they have the possibility to climb routes on Astraka (approach in 20min), or on Gamila (approach in 3h). This is the most appropriate choice during winter. Starting from the refuge of Astraka, it takes 3 to 5 hours to get to the walls of Gamila by passing through Karteros' gully (east of Gamila II), descending that gully to the base of the towers and finally traversing under the towers. As to the approach, there is also a shorter way that involves abseiling down the gully between the peaks Ploskos and Gamila I. The gully which is equipped is the one to the left, looking from Astraka's refuge; actually, it is equipped with 4 anchors, marked with red colour, for abseiling (35m, 60m, 50m, 45m) down to the base of the crag. In case there is a lot of snow, the two lower anchors may not be visible. The use of helmet in the gully is absolutely necessary.

The conditions for climbing Gamila's routes during winter are usually good from the beginning of February until the end of April.

The crags of Gamila are undoubtedly some of the most isolated ones of the Hellenic Mountains, which is the reason why it is extremely difficult for the rescue teams to act promptly in case of an accident.

Having Skamneli village as starting point, approaching the Face of Goura will take about 3 hours.

The approach to the Face of Ntavalista takes in 5h, if one starts from Konitsa village and follow either the track which leads to Drakolimni Lake or Kalyva's path.

There is water at a 10min distance from the foot of the face, at Gravos Stream that flows throughout the year.

Right above the village of Mikro Papigo, rises an impressive wall of northwest orientated towers. That wall continues alongside the valley of Voidomatis with a southwest orientation. Those towers basically belong to the massif of Astraka, but they are commonly referred to as: "Towers of Papigo". Climbing ascents have been reported only for the northwest part, where approach from the village is possible in 1 to 2 hours. The most appropriate way to approach the towers, which are located to the left, is the path that leads to the refuge of Astraka. More specifically, follow the path for about 1 hour until you reach the second of the four water sources of the path. From there, a horizontal traverse will lead you to the base of the towers.

Ploskos forms a small but interesting north crag, alongside the footpath that leads up from Xeroloutsa Lake to Drakolimni Lake.

In order to get to Tsouka Rossa, one must first approach Vrysohori village; this is located right underneath the massif of Tsouka Rossa. One can get to the village of Vrysohori either by the highway of Giannena - K. Zagori, or by following one of the next routes: Grevena - Vasilitsa - Palaioseli - Aoos Bridge or Konitsa - Palaioseli - Aoos Bridge. When approaching Vrysohori village, and about 2km before entering the village, take a turn to the left, in a dirt road, and then to the right in another dirt road. Right after passing a gully, take it to the left. The route goes on uphill, takes a big, right turn, and after 1km there is a glade surrounded by beeches, where the camp is pitched. A bit far away (200m), there is a water source to the left. The footpath, which is marked, starts just before the water source, at the begging of a dirt road, and leads exactly at the foot of the face of Tsouka Rossa.

The most appropriate season for rock climbing begins at the end of May and lasts until the end of October. In case the big terrace is still covered by snow, mind the rockslides.

The nearest village is Vrysohori village. Rooms, food and even a little pub are available.

Next to the road leading from Ioannina (Giannena) to Tsepelovo, there is an old stone bridge, called "Bridge of Kokkoris".

"Pyrgos tou Kokkori", which is of about 100m height, is the tower which is located next to "Kokkoris Bridge". Climbing on that tower offers a unique experience and often gives the feeling of climbing at Meteora. There is a climbing register book on the peak of the tower, like the ones which are placed at the peaks of the massif of Meteora. This one is an offer of D. Hasse.

The tower "Pyrgos tou gatou", which is of about 70m height, is located a bit deeper in the canyon that starts from "Kokkoris Bridge".

The tower "Pyrgos tou Misiou" is of about 70m height and is situated next to "Misios Bridge".

The tower "Pyrgos ton psyhon" is also located next to "Misios Bridge".

The massif of Astraka. 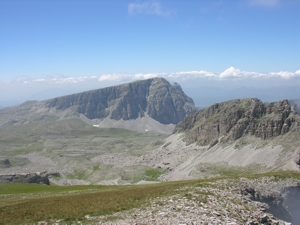 Astraka from the summit of Gamila I.

The crags of Gamila.

Gamila during the winter sunset.